The Burj Khalifa Tower (Arabic: برج خليفة‎ ) was built in Dubai, also known as Dubai Tower or Bis Dubai Tower, is the world’s tallest building and also man-made structure. You may refer related data of tower below, 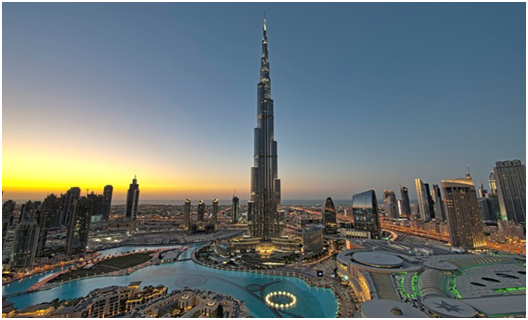 The tower is 828 meters tall and has 162 floors. It costs $1.5 billion to build. The building itself costs at least $1 billion, excluding the cost of large shopping centers, lakes and smaller towers. The Burj Khalifa Tower used a total of 330 thousand cubic meters of concrete, 62 thousand tons of reinforced steel, 142 thousand square meters of glass. About 4,000 workers and 100 cranes were deployed to build the Burj Khalifa Tower, pumping concrete more than 606 meters vertically, breaking the 492-meter record for the Shanghai World Financial Center building. The building is equipped with 56 lifts with a maximum speed of 17.4 m/s. There are also double-deck sightseeing elevator, which can carry up to 42 people each time.

The Burj Khalifa Tower was first built in 2004. On the evening of January 4, 2010, Dubai Chief Mohammed bin Rashid Al Maktoum unveiled the Heavy Curtain on the monument with claiming “The highest building of the world, Dubai Tower”, declaring its official completion and renaming it the “Khalifa Tower”.