Known by the world for the movie Avatar from James Cameron, Zhangjiajie is the first National Forest Park of China and a World Geopark listed in 2004. Covering an area of 1840 hectares, the Zhangjiajie Park is a heavenly Pandora formed by complex geological structures and peculiar landforms, say more than 3000 remarkable peaks standing into sky. 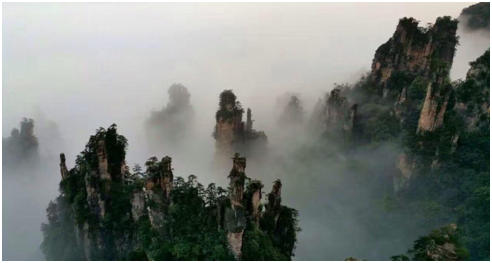 As a magic creation from the nature, Zhangjiajie in Wulingyuan is the wonderland where many Chinese TV productions or movies were filmed, like the Dream of Red Mansions, Journey to the West – two of the four greatest Chinese novels. Identified as National Forest Park with Yangjiajie, Tianzi Mountain, Suoxiyu Nature Reserve, Zhangjiajie is the most excellent part of capacious Wulingyuan Scenic and Historic Area. As a paradise for adventurers, here are countless vertical cliffs, beautiful Golden Whip Brook, thrilling glass skywalk encircling Tianmen Mountain for 60m, the highest water-eroded mountain cave–Tianmen Cave, frightening Yaozi Village, best views of all the peculiar peaks and top stone bridge in broad Yuanjiajie, One Step to Reach the Sky in the lasted discovered Yangjiajie with dense forest, shrinking fairyland to watch the most original natural landscape in Tianzi Mountain.

Zhangjiajie is the major tourist city in China, where has a lot natural tourist attractions, we suggest you to travel if you have a chance.