“Little Water Bear” was first described by a priest named Goeze (Full name Johann August Ephraim Goeze) in 1773, but it is incomplete. In 1774 and 1776, Italians  Lazzaro Spallanzani, a biologist, discovered that “slow-moving animals” (Tardigrada) can “resurrect” without taking off their protective shells in a water-scarce environment.Click Here For More. 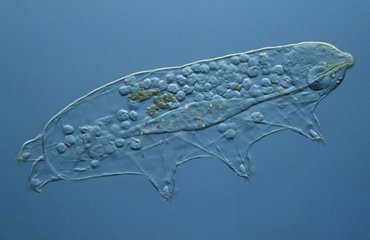 Fossils of water bears show that this species existed as early as the Cambrian Period 500 million years ago. Since their discovery, interest in the taxonomic position, morphology, life style, histology and Hidden nature of tarda has increased.

In 1851, Dujardin believed that Tardigrada was an organism originally living in the ocean, which was the first step in the classification of Tardigrada. From 1907 to 1909 Murray collected samples of a variety of Tardigrada during his British-Antarctic expedition. This led to a rise of 25 species in a very short period of time. In 1928, Mr. Turing established a new order for Tardigrada.

According to Dujardin in 1851, they had a pharynx similar to that of nematode animals, and considered “water bear” to be a close relative of nematode animals. In 1909, Richter J believed that its close relatives should be arthropods. At the same time, the most experts agree with this statement. It was classified as an arthropod class in 1929 on the basis of histological evidence at that time. By 1953, a technological basis was finally available for measuring oxygen consumption in the normal and cryptic state of Tardigrada animals. In 1968, the scientists observed the storage cells of Tardigrada animals under an electron microscope.